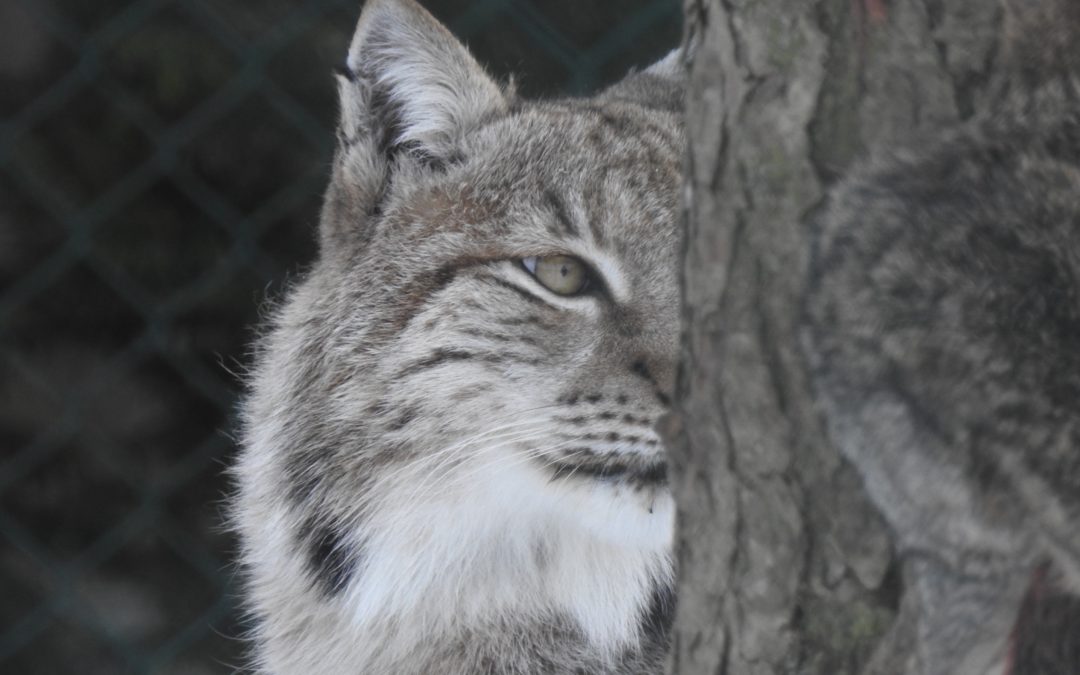 Keeper of Secrets: Rewilding and nature in fiction

Keeper of Secrets author Sarah J Dodd discusses Emily’s emotional journey and the themes of nature and the wild.

When people ask me why I decided to write about the rewilding of lynx in Keeper of Secrets, the answer is – I didn’t! Not at first, anyway. I’m not the kind of writer who plans a story at the outset (though I sometimes wish I was – it must be so much more efficient), so I simply started with a setting and a season – a misty, mysterious village in winter. Then I brought in my protagonist, Emily, with her grief and loneliness, which seemed to match the darkness of this northern location. I knew I wanted to include big cats roaming in the wild because that has always intrigued me, and that’s when I came across the concept of rewilding lynx in the UK.

Straight away, I realised that it would probably provoke strong opinions in people, either for or against, and thought it would be a great background for the more central story about Emily and her emotional journey. It’s also very topical, since there are consultations taking place now about whether to try this out for real. In the book, different views are raised with (hopefully) equal empathy, from the sheep farmers worried about their flock to the ecologists passionate about restoring the balance of nature. I hope it’s clear throughout Keeper of Secrets that the lynx are beautiful creatures, simply being their natural predator selves. Even when Emily tries to rescue a lynx kitten, it never becomes a pet and she is forced to recognise that nature needs to stay wild and can’t always be tamed to suit humans.

The emotional themes of the book are loneliness and loss, things that we all experience at some point. Loneliness is the invisible ‘beast’ that stalks Emily and frightens her even more than the ones she can see. All the characters in the book have this in common, even though they are lonely for different reasons. They may completely disagree about the lynx rewilding project, but they still need each other. I think this is really important for children to realise – that you can be friends with someone who sees things differently than you do. If we can all learn to listen more and judge less, and to come together around our shared humanity, then perhaps the loneliness beast will become endangered or even extinct.

It’s well documented that being in nature is good for mental and emotional health, and if even one more child or family ventures out into the countryside as a result of reading Keeper, that will be a huge bonus. But reading is also an important way to keep ourselves robust and curious, to realise that, whatever difficult emotion we may be experiencing, we’re not the only one. My overwhelming motivation in writing the book was that a child out there who is lonely or grieving might read it and find comfort and relief in knowing that they are not, after all, alone. 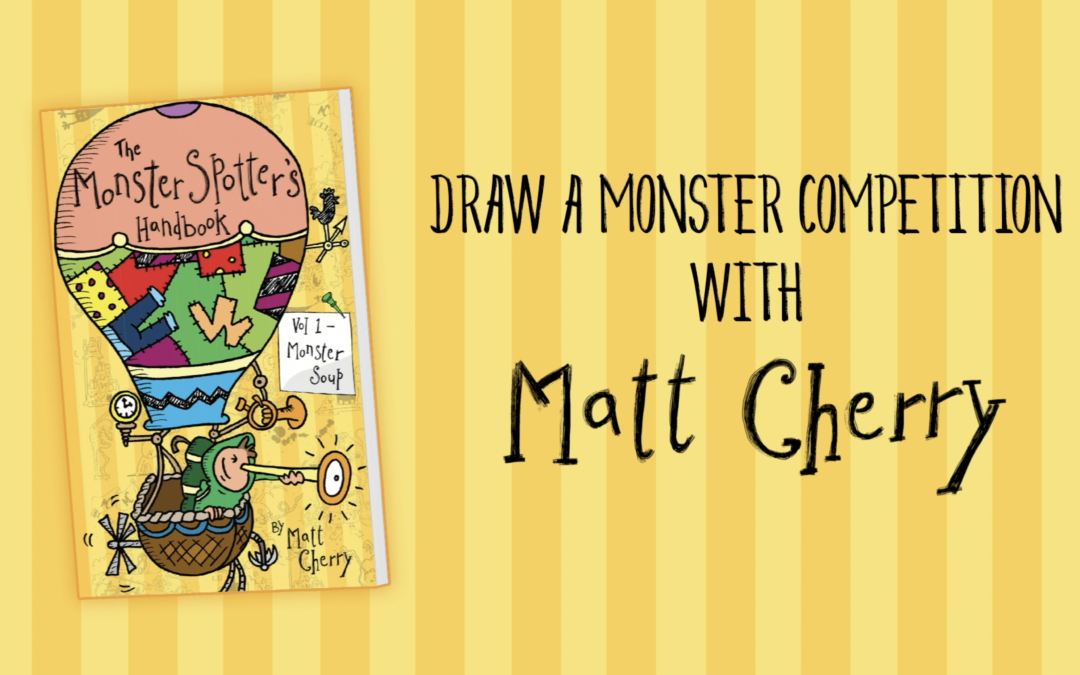 Follow our courageous hero monster spotter Edwin Spook as he travels across the globe to save his monster friends from certain doom, stop the dastardly Monster Catcher and discover the secret recipe of Monster Soup.

To celebrate the release of Monster Spotter’s Handbook we are launching a fantastic drawing competition. Draw and colour in one of these fun monster characters for the chance to win a fabulous prize!

A signed and dedicated copy of The Monster Spotter’s Handbook and a limited edition badge. 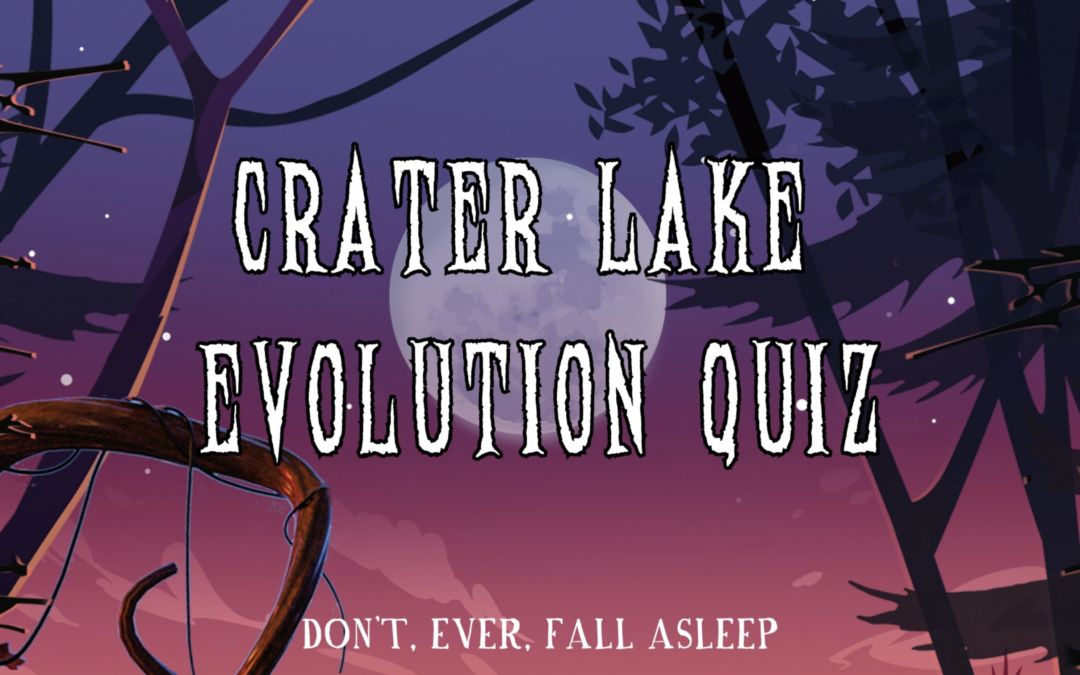 Do you know all about Crater Lake? Test your knowledge with this fun quiz with Jennifer Killick! 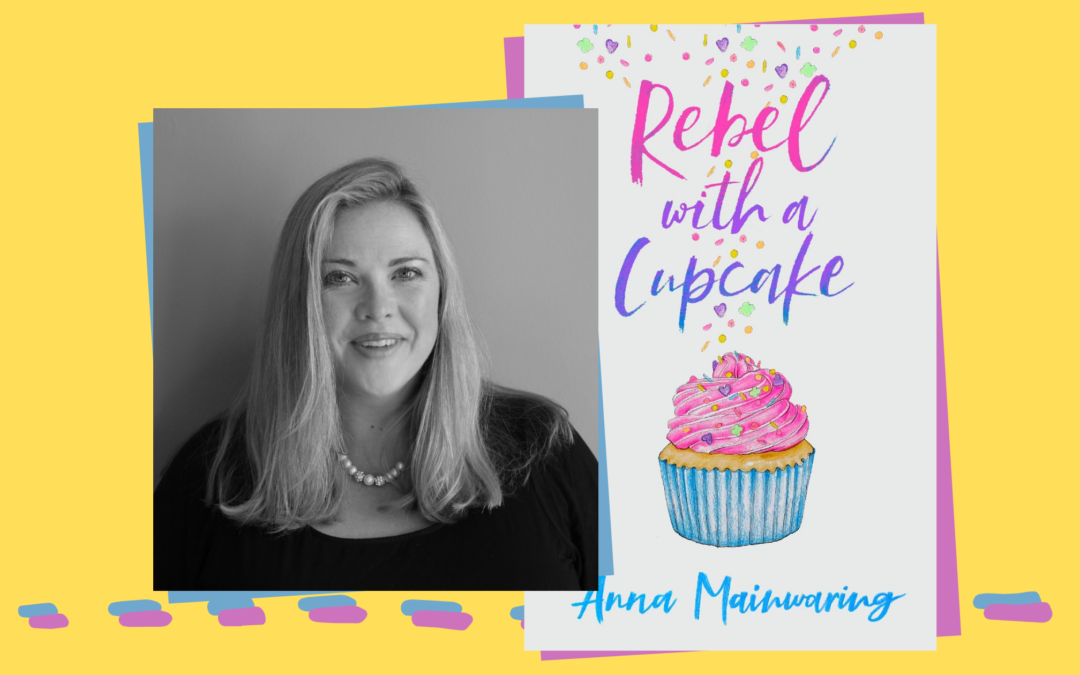 Anna Mainwaring: ‘Rebel with a Cupcake’ one year on

Rebel with a Cupcake is the book of my heart. One year on from its UK publication, here are  a few thoughts on why it matters so much to me and why it speaks to so many young people out there.

Rebel with a Cupcake deals with (please excuse the pun) weighty issues. I’m very glad that there a number of novels published which deal with society’s attitudes to weight, the pain of fat-shaming and the importance of body positivity as it’s a subject close to my heart. From childhood onwards, I’ve always been larger than average. As a teacher at form time, I would overhear so many heart-breaking conversations about fear of being fat, the unintentional fat-shaming of others, the horror that being fat has for so many girls, the complex relationship so many of them had with food. They craved food but felt that they weren’t allowed to eat.

Out of all of this, the idea for Rebel with a Cupcake was born. Jess is confident, considered attractive in many ways, but even this confidence is punctured by a combination of pressure from her model mother and teenager vulnerability. I know some readers might find Jess’ choices with regard to food as problematic. There is no doubt in my mind that all the science says that diets don’t work long term. However, diets/products are endorsed by celebrities on social media every second of the day.  I wanted to write something that was honest about what it’s like to be a larger person in a society which is often fat-phobic. Body positivity is a wonderful thing. But it is, in my experience, hard won and some days you can be more confident than others. To have a character who never felt any doubt about her appearance, to me felt false. And who wants to write a novel for young people which isn’t grounded in truth? I wanted Jess to feel the doubts and insecurities so many woman and girls feel but still to progress on her journey back to confidence. With a fair few jokes along the way! 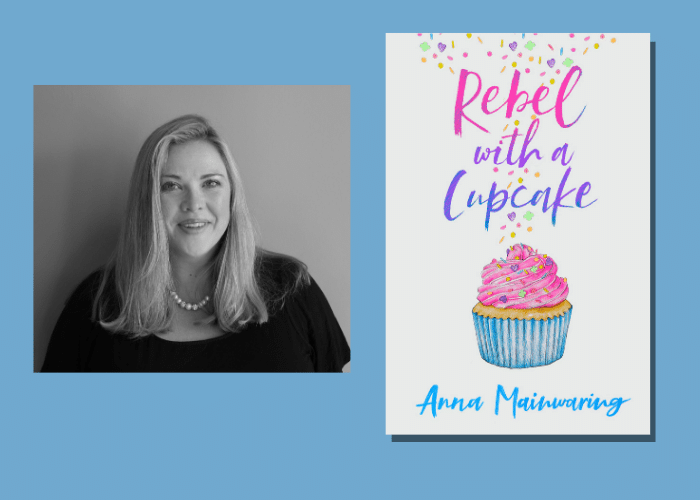 Rebel with a Cupcake: Anna’s baking triumphs and disasters

The lure of baking is always the same. It seems like a miraculous process, the closest any of us will come to real magic. You take a few simple ingredients – eggs, flours, butter with bit of flavouring and colour – and a few hours later, a thing of sheer beauty will emerge from your oven, an alchemical masterpiece, blending delicious flavour with immaculate appearance.

At least that’s the dream. And it might be true for the protagonist, Jess, from my novel, Rebel with a Cupcake’who deals with her feelings about being bullied by a teacher by re-creating her school in gingerbread and then eating it. I had in mind that she created something like this, a wonder of baking, engineering and creativity.

But as we all know, and children often have to learn when the first independent baking experiment goes wrong, baking is much more like this.

We aim for a unicorn of elegance and beauty and end up with a monstrous, many hued mess, an insult to any self-respecting mythological beast.

I am generally considered a good cook. But while I love cakes, unlike Jess, they can be my nemesis. A few months before Rebel with a Cupcake was published in April 2020, (when one could go to a café with friends)  I met some fellow writers for a chat in Manchester Library. In the café, Vimto cupcakes were on offer. As an adopted Mancunian, I love a bit of Vimto and was duly tempted. They looked gorgeous, they tasted spectacular.

So, when I was asked to bake some cupcakes to celebrate the launch of Rebel with a Cupcake, I decided to recreate them. They were tasty, northern and a bit different – they were in fact the character of Jess in cake form. Challenge accepted.

Now the cake part was easy – now onto the icing. I wanted some Vimto cordial to get the full fruity taste but I couldn’t find any – a global pandemic was happening after all. Never to be put off when I’ve got an idea, I decided to buy normal Vimto and reduce it to a sticky, cordial like substance by heating it over the hob. Easy peasy – what could go wrong?

It was all going swimmingly. ‘I’ll let it reduce for a bit longer,’ said I, ‘I won’t get distracted by Twitter, forget about the time and make a stinking, smokey mess of it.’.

But of course I did. Children came running from bedrooms, complaining of the smell of burned fruit. “It smells like death,” one cried. The smoke alarms went off in every room. My next-door neighbour who is an ex-firefighter was looking over the fence in alarm when I ran out with the offending saucepan.

I did not ‘nail it’. I messed it up. From then on, cupcakes have been bought not made … If nothing else, it saves on the washing up. 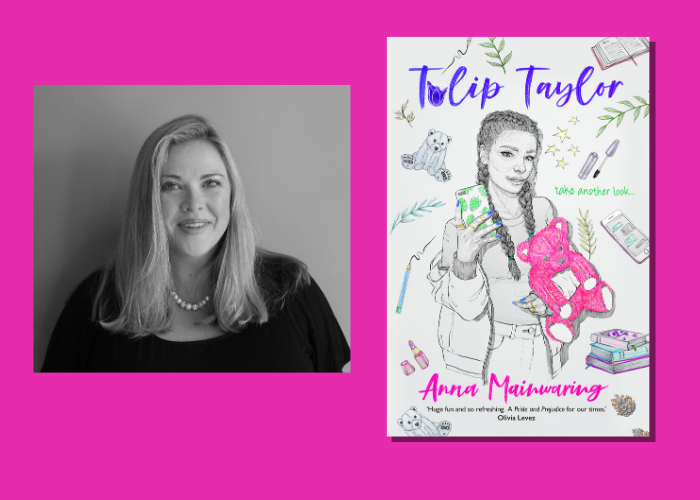 So, let me ask you a question – list all the different genres of YA that come to mind?

Fantasy – yes. Contemporary – yes. Dystopian – of course (though who knew that they would become history and we’d be living through one in 2020/21?). Eventually you’d come to comedy. Whilst funny books are fortunately plentiful in middle grade, there seem to be fewer aimed at teenagers. But why? Don’t teenagers deserve a giggle too?

Well, you might say being a teenager is pretty horrific. There’s really not much to laugh at, is there? Increased pressure at school. Being possessed by a strange cocktail of hormones that change your body and take hold of your moods so that Jekyll and Hyde aren’t two characters you study but a fairly accurate description of your day before you even get to breakfast. So, it’s no surprise that the majority of books written with teenagers in mind focus on the darker side of things to begin with but end up in the light.

However, I do see things somewhat differently. Firstly, I live with two teenagers and if you don’t, then you’re really missing out. Because let me tell you, they are hilarious. In the days of glory when children actually went to school, I would wait with anticipation for an account of what had Gone Down at school. One of my favourite stories was a particularly intense argument that took place during a silent library lesson. Accusations were mouthed to each other, culminating in a book fight before the silent antagonists had to be separated to cool down. Of course, I’m not advocating violence to books and I’m assured no books were damaged in the confrontation, (that would be a tragedy) but a wordless but furious confrontation is as ridiculous as you might find in the highest farce.

And that’s what interests me – how the elements of comedy and tragedy are aligned. I love exploring hubris, an element of both genres. A character is over-confident and sure of success – in comedy, you wait with delicious anticipation knowing the writer is going to bring them to the ground shortly. In Tulip Taylor, make up obsessed Tulip smuggles an eyeliner on to the reality TV show that she’s somewhat unwillingly volunteers for. She revels in her cleverness at breaking the rules, only for it to work its way down from her bra and poke her in a very painful place. All caught on camera. Tragic for Tulip’s sense of pride, (hopefully) comedy gold for the reader.

Finally, given the last twelve months, I really think that our teenagers deserve some laughs even more so than usual. Give them Holly Smale, Beth Garrod, Jenny McLachlan, you could even give them Tulip Taylor or Rebel with a  Cupcake. So yes, writing funny for books for teenagers is not an easy thing. But in these tough times, I really do think that they deserve at the very, very least, the chance to escape into a book which will definitely make them smile and who knows, there might even be laughter.